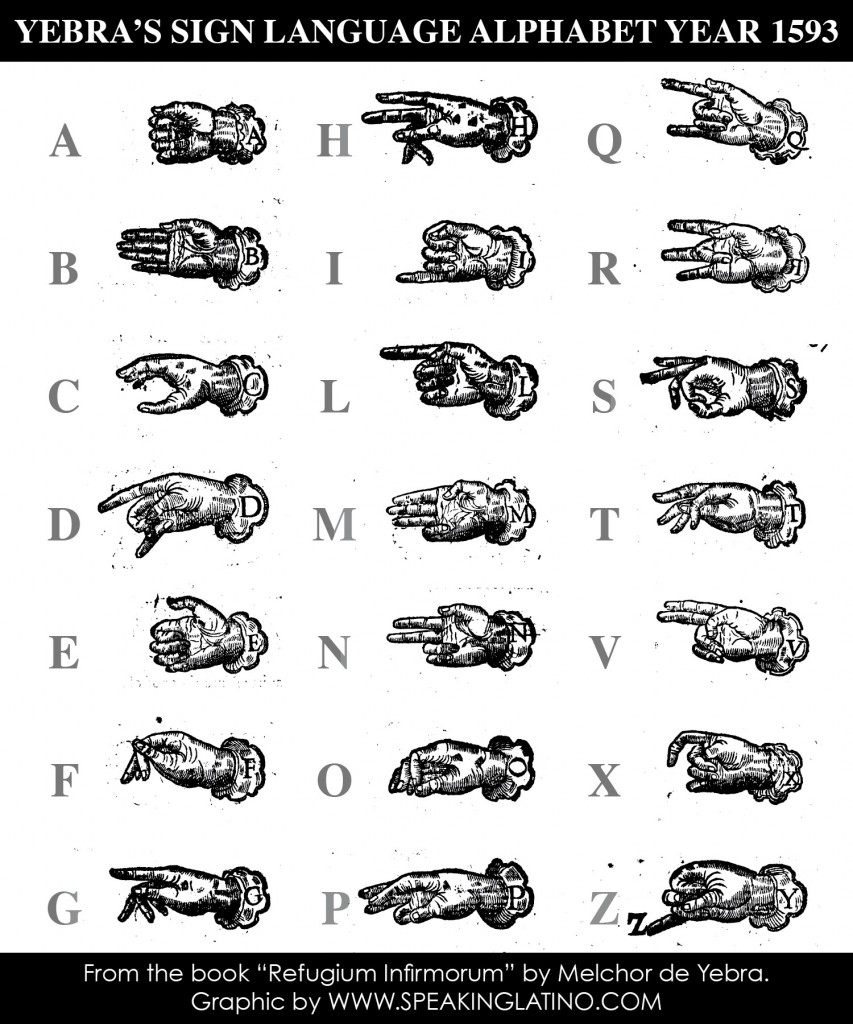 According to a document published by Cultura Sorda.eu, author Alejandro Oviedo indicates that “in most of the countries whose official languages are written with the Latin alphabet, deaf communities use the same manual alphabet. Although there are some differences between them, most manual settings used to represent the letters are the same.”

The manual Spanish alphabet is based on the one published in 1620 by Friar Juan de Pablo Bonet in his book Reducción de las letras y Arte para enseñar á hablar los Mudos (Summary of the Letters and the Art of Teaching Speech to the Mute). There is a controversy with Bonet where some sources indicate that he copied the manual alphabet from Friar Melchor de Yebra.

Friar Melchor de Yebra is credited with the oldest physical record of a manual alphabet: an illustration published in Madrid in 1593 (see the above image). There he established that the alphabet he was presenting was by Friar Juan de Fidanza also know as San Buenaventura.

Plagiarized or not, thanks to Bonet’s book, the alphabet was then recorded for future generations. Those following generations then used it to teach mutes and also to translate it, with some variations, to other European languages in the XIX century. If you are interested, you can download a free digitized copy of Yebra’s Refugium Infirmorum and Bonet’s Reducción de las letras y Arte para enseñar á hablar los Mudos from Google books. Just as the spoken language differences we often discuss on Speaking Latino, the same occurs with local and regional variations in sign language. Despite the efforts of creating an International Sign Language (ISL), previously know as Gestuno, that is often used in international meetings and has a limited lexicon, there isn’t a universal sign language that can be understood by all the mutes in the world. Currently, there are approximately 200 different signs languages around the world.