Last week a terrible ruckus was formed when a manipulated video of Venezuela’s President Nicolás Maduro supposedly confusing the Cuban and Puerto Rican flags circulated on the web. To add more to the mess, the Puerto Rican singer Ricky Martin retweeted the video, an action that angered Venezuelans even more. Finally, the singer had to apologize when he learned that the video was maliciously cut to give the wrong impression.

The Spanish speaking countries flags carries a lot of history in their design and development, mostly related to their independence. So here is a list and short story of the Hispanic flags that have a look-a-like from somewhere else around the world.

Hispanic Flags With Similar Flags from Around the World 1. Cuba and Puerto Rico: A symbol of brotherhood

It is very common for people to confuse these two flags because the one from Puerto Rico was actually designed based on the Cuban flag. Basically both flags have the same layout with reversed colors. It happened in late XIX century as a symbol of brotherhood between these two territories that were fighting for their independence from Spain. Therefore, the Puerto Rican flag was a symbol of revolution and was even banned by law for 54 years (from 1898-1952) when Puerto Rico became an American territory. 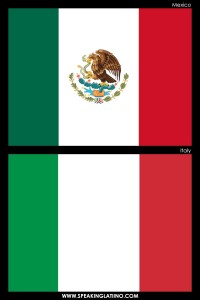 The designs of the Italian and Mexican flags are similar: green, white and red vertical stripes in the exact same order. The eagle shield in the center distinguishes the Mexican flag. Many people believe that just placing the shield on an Italian flag can make the Mexican one, but the reality is that the Mexican colors are darker and the dimensions are different. The origins of both flags are not related in any way. 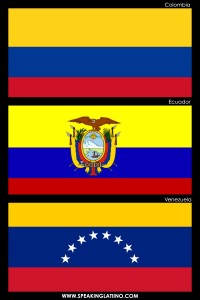 From 1819 to 1831 Colombia, Ecuador, Venezuela and other close territories formed one country known as Gran Colombia or Great Colombia (originally República de Colombia). Their flag was designed with yellow, blue and red horizontal stripes. After the disintegration of Gran Colombia, the resulting countries continued to use the colors of this extinct nation as a sign of their common heritage. 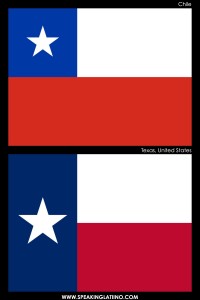 4. Chile and Texas, USA: Inspired by the United States?

It is a fact that the Chilean flag came first, but some historians insinuate that participation of U.S. Congressman Joel Roberts Poinsett in the Chile’s independence political activities and a great friendship with José Miguel Carrera (Chilean First President of the Governing Council) may have influenced developing this patriotic symbol.

Long story short, as the events that culminated in the independence of Chile were developing, its flag was also changing. From horizontal white, blue, yellow stripes to white, blue and red with a shield in the center. A flag with a shield could be used in official acts, but ships should carry a flag without a shield (according to maritime rule). This resulted in the design of a third flag similar to the one we know today where the star is incorporated. The adoption of the star configuration goes back to the star used by the Mapuches.

If we look at the maritime flag of Chile, it resembles the Bonnie Blue flag (of the Republic of West Florida from 1810) which inspired the Texas flag. In fact, according to the Texas History Page, the Chilean maritime flag was used to distract and avoid attacks to the ships.
“They had ships that carried their cargo along the coast of the Gulf of Mexico and in order to give their captain an advantage when encountering pirates or other hostile vessels, they used a maritime flag similar to what Samuel had seen the Chilean Navy use in South America.” 5. Paraguay and The Netherlands: Not related

Red, white and blue are one of the most common color combinations for flags. The flags of Paraguay and The Netherlands feature these colors, in the same order and with horizontal stripes. The most obvious difference is that the Paraguay’s flag has their shield in the center. Despite their similar look, their origin is not related. 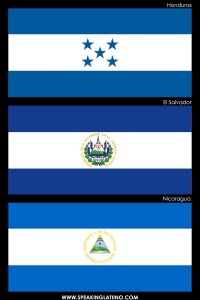 Argentina (back then part of the Provincias Unidas del Rio de la Plata) was part of the independence history of the Central American countries. The Central American provinces, already freed from Spain, were united under a republic called Provincias Unidas del Centro de América and adopted a flag similar to the Argentine flag. Later on, the union was dissolved but each country kept similar elements like the color combination.

In the mid 1800’s Honduras, El Salvador and Nicaragua formed the Federación de Centro América (Central American Federation) and later the República Mayor de Centro América. A new updated flag united them as a country. The efforts to maintain the union came to an end, but this last trio maintains similar flags. 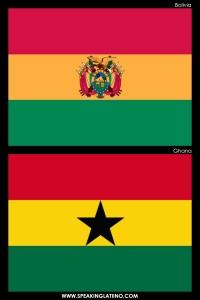 7. Bolivia and Ghana: Likely not related

The flags of Bolivia and Ghana are extremely similar: red, yellow and green stripes in the exact same order. The only difference is that the flag of Ghana has a black star in the center. Bolivia’s flag adopted this tri-color combination in 1826 and the final order of the stripes was changed in 1855. On the other hand, the flag of Ghana was designed in 1957 and it uses the Pan-African colors (red, green, black / red, green, yellow) first used by the Ethiopian Empire in 1897. 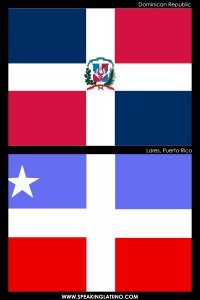 The flag of the municipality of Lares, Puerto Rico is considered the first Puerto Rican flag. In 1868, independence leader Ramón Emeterio Betances urged Mariana Bracetti to create a revolutionary flag using the Dominican flag as an example. This was the way to promote the idea of uniting the three Caribbean islands into an Antillean Confederation.

As a bonus, here are some flag related Spanish vocabulary words and phrases: