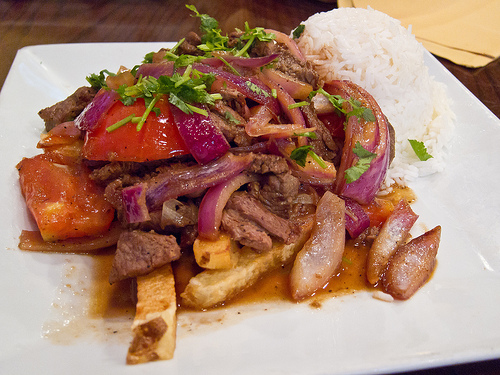 My first real exposure to Latin American culture occurred one day in Washington, DC when Nora, a Peruvian friend, walked me two blocks from our office to a small Peruvian restaurant, El Chalán. In the basement of a huge townhouse, only those in-the-know would ever even have noticed the place. The waiters were all Peruvian, only Spanish was spoken, and most of the patrons were Peruvian. This is where I discovered how versatile Peruvian cuisine is, coming from a mishmash of Native and Spanish influences with a little bit of Chinese fused in. It is once of the world’s finest.

The Illustrated Guide To Peruvian Food: 9 Dishes You Need To Try 1. Ceviche
Ceviche is raw fish caught fresh from the Pacific and “cooked” in citric acid. The fish is then created with onions and jai peppers and services at lunch with choclo (corn) from the Andes. Some people request the citrus juice that the fish was marinated in and they drink it. This is what is known as leche de tigre, tiger’s milk, and if you drink it you too will probably roar. People usually drink a beer, like Pilsen Callao or Chicha Morada. 2. Cuy
Next, make sure you try the cuy. Ever heard of it? It’s Guinea Pig, those fat little pets that roam the country of Perú, like rats. They are raised domestically, and the meat is a national pastime. In fact it’s so revered that there is a portrait of Da Vinci’s Last Supper in a chapel that depicts Jesus and the Disciples around a plate of cuy. The meat is bony as you can imagine; it is after all a little beast. The whole animal, including the head (as seen in this photo) is served up from the spit directly to the table. Many who have tried it say that it tastes like a wild rabbit or other game. 3. Causa
If you want to head over to the local market for a bite to eat make sure to check out the potatoes and avocados. There are so many her that you could literally be crushed by them. These two ingredients: avocados and potatoes are part of the causa casserole, which is layered with sliced veggies and served cold. In addition they may even include tuna, or hard boiled eggs in the mix. 4. Ají de Gallina
Ají de Gallina is a dish served with a yellow pepper which is used in a rich sauce with rice.

5. Lomo Saltado
Did you know that Perú was the landing spot for Chinese immigrants at one point? Many came to the country looking for a new life and work. When they came to the shores of Perú they brought with them their cuisine. They embedded their footprint here which of course caused a fusion of Asian and Peruvian foods. Lomo Saltado is a stir fry that has beef (or chicken), tomatoes and onions in a soy sauce. It’s also cooked up with french fries. They serve it over rice and it’s another national dish to try. See the main photo of this article to see how it looks. 6. Anticuchos
Anticuchos can be found on street-carts and street food stalls (anticucheras). It can be made with different types of meat cut in chunks and inserted in a wooden skewer. The meat is marinated in vinegar and spices (such as cumin, aji pepper and garlic). The most popular type is the one made with beef heart (anticuchos de corazón). Anticuchos often come with a boiled potato. It is one of the cheapest plates in Perú, but also one of the tastiest ones.

8. Chifa
Chifa or Chinese food is excellent in Perú. It has like a Pekin style, but adapted to the Peruvian taste. It is very tasty. You can have Taypa, which is a mixture of different meats in a dark sauce, Kamlu Wantan, which is fried wonton, with pork, vegetables and is sweet and many others that are really important to try. People in Perú usually drink Inca Kola, with this kind of food. For more drinks ideas check out a previous Speaking Latino article The Peruvian Bar: 7 Drinks from Perú You Should Try.

Trying local food is an excellent way of learning new vocabulary. So what’s your favorite Latin American cuisine and why?

Check out these other Peru Culture articles.