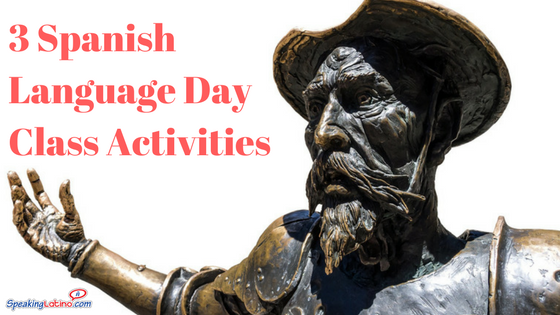 Don’t tilt at windmills, seize the day! Introduce your students to Cervantes and his most famous, most beloved creation, Don Quixote, on Spanish Language Day this April.

The Significance of Spanish Language Day

Spanish Language Day, also known as Día Mundial del Idioma Español, is a celebration of multilingualism held every year on April 23rd, the anniversary of the death of Miguel de Cervantes Saavedra, the famous Spanish writer and author of The Ingenious Hidalgo Don Quixote of La Mancha. This work of literature from the early 1600s is significant, so Cervantes holds a special place in the Western canon.

Miguel de Cervantes Saavedra, often known as simply ‘Cervantes,’ is a fascinating figure in Spanish history. He is best remembered as a man of letters, thanks to his literary masterpiece Don Quixote and other works, but he was also a military man.

According to historians, Cervantes sustained injuries to his left hand, rendering it almost completely useless, during the Battle of Lepanto. Despite this trial, Cervantes went back to fight and maintained his military career until he was captured by a Moorish captain, held captive for five years, and survived as a prisoner of war.

Clearly, Cervantes was a complicated man who did not shy away from a struggle, but it is generally believed that Cervantes was not always a happy man, and he lived with a lot of suffering throughout his life. This understanding of Cervantes may shed some light on the character of Don Quixote, Cervantes’s most memorable and charismatic character. Don Quixote is the name of Cervantes’s famous protagonist and the hero of The Ingenious Hidalgo Don Quixote of La Mancha. He is a wealthy man, with too much free time, so he reads a lot of old-fashioned adventure stories about chivalrous knights and maidens in distress. These stories feed Don Quixote’s already vivid imagination, and the reader soon discovers that Don Quixote, for all of his romantic ideals and good intentions, is completely out of touch with reality.

Interestingly, even though Don Quixote presents with a lot of behaviors that could be described as mad or unhinged, he is actually very intelligent and unexpectedly organized as he pursues his life of romance and adventure. All of these details make for some hilarious stories, but at the heart of the work, the reader will find compassion and tenderness.

Students may enjoy learning that Don Quixote is the original source of some well-known sayings, like ‘tilting at windmills.’ To tilt is a jousting term, and Don Quixote, in his madness, tilts at, or challenges to a fight, windmills at one point in the story, thinking they are giants and, therefore, his enemies. Nowadays, ‘tilting at windmills’ means an exercise in futility, or an attempt to confront problems that don’t even exist. Even Don Quixote’s name has transformed into a word that describes people who so idealistic and overly romantic, they make totally impractical decisions; ‘quixotic’ is a direct reference to the character of Don Quixote.

So clearly, Spanish Language Day honors Cervantes for good reason. Try out these lesson plans below to give your students the opportunity to learn more about Cervantes and his most endearing hero, Don Quixote.

1. An Introduction to the Man of La Mancha for Beginning Spanish Students

Learning objective: Students will learn about the origin of the expression “tilting at windmills.”

In class, if you have a projector screen and access to the internet, introduce beginning Spanish students to Don Quixote with this short and accessible YouTube video designed for young children. Reinforce what your students have learned from the video with a brief discussion of the episode; ask students questions like, “what important qualities might someone need in order to be a good knight?” and follow up with questions that connects these qualities to Don Quixote, like “do you observe any of these qualities in Don Quixote?” Emphasize to students that even though Don Quixote might seem a little misguided in this particular adventure, he is trying to be brave and heroic.

Then, if your students are high school-aged or older, explain to students that the expression “tilting at windmills” is an important expression often used today and show them examples like these: an NPR report on the futility of finding affordable concert tickets and a recent business article advising investors to avoid a certain company. Check for understanding by asking students if they have ever ‘tilted at a windmill’ themselves, or observed someone else ‘tilting at windmills.’

2. Don Quijote in Art: An Interdisciplinary Project for Intermediate Students

How to do this activity: This activity invites students to read selected quotes from Don Quixote and to make connections between the literature and their observations of corresponding works of visual art. Spanish artists Pablo Picasso and Salvador Dali are perhaps the most famous names linked with images of Don Quixote, so either project images of their work on the wall or board in your classroom while doing this activity or distribute copies of the images on paper to each student.

Give students the quotes from Don Quixote, either selected and organized by you personally, in English and Spanish, or selected from an assortment pre-sorted for educators, and discuss the meaning of the quotes in an informal class discussion. Give the students time to puzzle through the complex language.

Then, ask the students to match a quote with one of the visual images and to explain the connection either in writing, if you prefer a written assessment, or to the rest of the class, if you prefer an oral assessment. Encourage any observations at all, as sometimes the most random-seeming thoughts can be the most profound. Learning objective: Students will learn about the notion of the literary canon and the contemporary role of this novel within the context of the canon.

How to do this activity: Assess prior knowledge by asking students if they have covered the notion of the literary canon in English class. Review or introduce with this definition of ‘canon’ from the American Heritage Dictionary: “an authoritative list, as of the works of an author” and “a basis for judgment; standard; criterion.” Mention to students that the idea of a literary canon is actually a controversial one, and ask the students if they can figure out why it might controversial.

If they get stuck, guide them towards thoughts about the difficulty around deciding who gets to be the authority in charge of deciding what’s good and bad. Encourage a lively discussion around their own opinions of what’s good and bad: favorite foods, movies, and music all have the potential to rouse some emotional conversation amongst adolescents, so allow them to discuss who should be in charge of the criteria that makes a movie or a song or a food item worthy of being in a ‘canon.’

Then, link this idea to literature and to Don Quixote by explaining to students that for a work of literature to be considered a part of the literary canon, it must have beautiful elements. Give students an original passage as well as its English translation from Don Quixote and ask them to read it and identify beauty in the passage, in either English or Spanish.

Allow the students to share their opinions and discuss their findings in class, finishing with a vote to decide whether or not this passage from Don Quixote actually deserves to be a part of the literary canon.