Let’s pretend that you are going to be transferred for work to a Spanish-speaking country. You might already know Spanish, so there will be no “language barrier” that will affect your transition to your new company. That was exactly what I thought when I moved from Chile to Argentina in 2001. When I arrived at the office and started asking for basic office supplies, my assistant looked at me with a lost face. Apparently, I was speaking a whole different Spanish language.

Don’t believe me? Let’s take for example the Spanish language word for pen. This simple and common item can be identified with so many words in Spanish-speaking countries. Take a look at this infographic that lists 12 Spanish words for pen and the countries that use them. But there’s no need to panic or try to memorize all the words. If you use the word bolígrafo you can be understood anywhere. 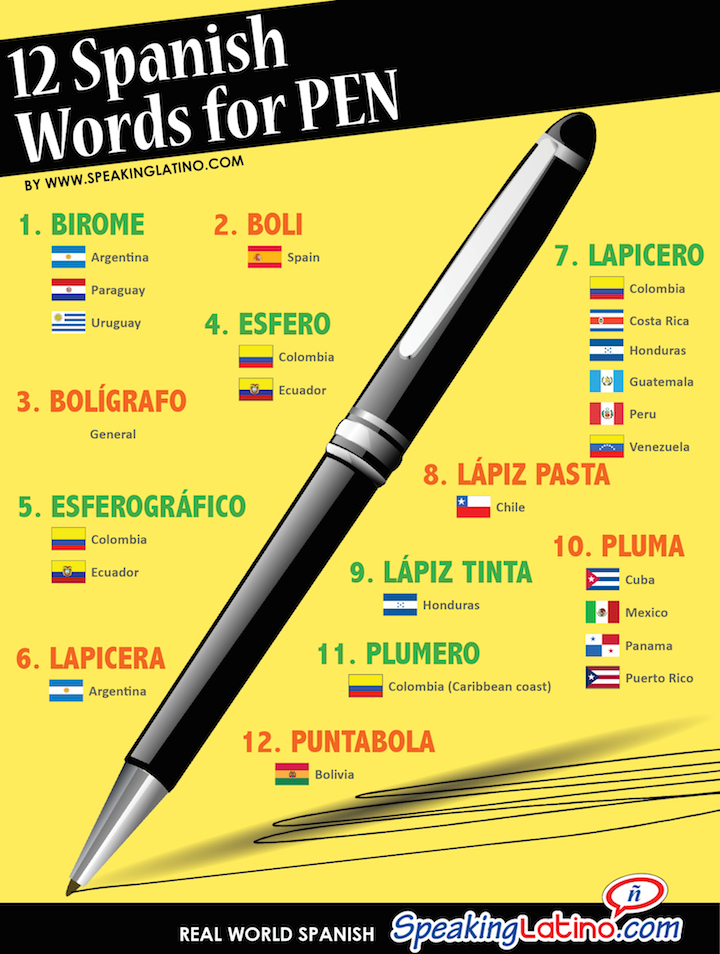 Spanish teacher: You can print and hang this poster in your classroom here.

1. birome
Used in Argentina, Paraguay, and Uruguay. This word comes from the brand “Birome” created in the 40’s by the company Bíró Pens of Argentina owned by the Bíró brothers and Juan Jorge Meyne. So, birome is a combination of the names Bíró and Meyne.

2. boli
It is the short for bolígrafo and it is used in Spain.

3. bolígrafo
This is the general common word for a pen.

4. esfero
Short for esferográfico and is commonly used in Colombia and Ecuador.

11. plumero
Used only on the Caribbean coast of Colombia.

Leave me a comment if you know of any other countries that use any of these Spanish language words for pen, or words to add that I missed.